Depression is the inability to construct a future. ~ Rollo May 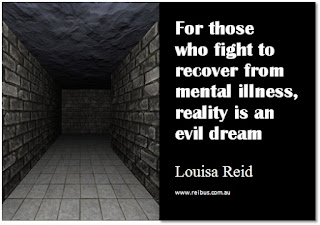 Sometime last year - maybe August but I've forgotten when - I had started paddling with the local dragonboat paddling group. They practiced one and a half hours on Saturday mornings, too much for me when I was still recovering from my stroke - the physical stuff didn't relate to my ABI, but it didn't help my brain. So I went on to the different paddling group who only did one hour and wasn't as tough as the earlier one.

This other group came out of breast cancer sufferers and even though I didn't really feel like I "fitted", I felt welcomed. I told them about my brain aneurysm surgery and my stroke, and they told me that supporters were welcome. Even with a history back to my grandmother - who died from a heart attack after she had a mastectomy somewhere around 70 years old - and my own breast scans five years ago when they found a benign tumour, I felt I was being accepted because of my own ABI. I paddled almost every Saturday morning.

I was invited to a morning tea celebration which was paid for by a supporter who had lost his own sister to breast cancer. I felt "at home" at my first meeting with so many people. I paddled every Saturday when the weather was good.

In September I received an email about the AGM, and I went to that. They discussed members' costs, and I cried a bit about myself - I wouldn't have chosen to do so, but it overcame me as I realised I couldn't afford their whole fee. They told me that I only needed to pay the $30 to become a member, and that my full payment could be held back until I could afford it. Once again I felt welcomed.

We had a pink day celebration in November. We went to one of the member's home for a "candle party". In December I went to Gold Coast with them for a christmas regatta, and paddled twice before it was too difficult for me. There was a local christmas stall which I helped with, and a member's christmas party at another of their member's home. I took along a Secret Santa present, and got one for myself!

We started again in the first week of January, and I planned to paddle as usual before christmas. This month I got to the first paddle practice and took off the second week because the weather - and wind - was lousy. Then yesterday I went back again, looking forward to yet another paddling. Until one person broke me.

I knew that paddlers had to pay for the insurance within the club. I knew that I had told them that I couldn't have afforded it back then. I knew that I was still waiting for QIRC to send me a decision when I hoped and hoped and hoped that it would end up financially definite for me. I knew that they had told me that it was okay - for as long as it might take for me to pay. I knew that the person who broke me yesterday morning also knew about me because she'd also been in that same AGM meeting. But she still chose to, loudly, in front of even new paddlers, ask me if I remembered that I needed to pay the insurance fee or that I couldn't paddle.

I cried at home for an hour. I asked myself if my stroke was causing this sort of aggravation, but I couldn't answer that. I asked myself why that person so shortly ago had said that to me in front of new people who didn't know me from a bar of soap, but I couldn't answer that either. After an hour of tears I had no idea what I would be able to do for the paddling group - and what would I really want to do, because I now felt broken by them.

Yesterday I flicked all of that thought to the back of my mind while I had a wonderful afternoon with a friend and her motorbike. This morning it very briefly popped back, but I know now that I have decided I can't go and "support" that group when they didn't support me yesterday. I don't think I would ever have behaved in that very bad way that one of their members behaved to me. I don't know if they have spoken to her, I don't know how they would have reacted, but I can't go back. I paid $30 to be a member of their group, but now I'm not. They are entitled to use that money to support their group.

Now I need to find a different future for me.