We are more closely connected to the invisible than to the visible. ~ Novalis

The aphorism I chose for this post so closely described the events of the 2 September, when I went back to the neurosurgery department for the results of my angiogram.

Seems I had not just one, but two aneurysms.  And the main aneurysm was larger than they had first detected.  I guess that's exactly why they do the angiogram, it gives a much more detailed picture of the situation. 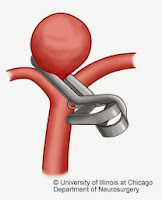 The registrar discussed the options available for treatment.  Basically, there are two main methods - coiling or clipping.  For a saccular aneurysm such as mine, clipping is the usual method.  This is an invasive procedure which requires a craniotomy - brain surgery.  The alternative, coiling, uses a procedure very similar to the angiogram (see previous post), and platinum coils are fed into the aneurysm via a catheter.

In my case, with saccular aneursyms, they would be looking at clipping.  The Brain Foundation website (USA) has some very good information about this procedure, which is probably just as well because it looks and sounds damned scary!  This is my brain they will be drilling into!

As with any invasive surgery, there are risks.  The registrar walked me through it all, and gave me a copy of the Consent Information form for "Craniotomy and Clipping of Cerebral Aneurysm". The principle risks include infection, bleeding, heart attack, stroke, long term brain injury, memory disturbance, fluid leakage around the surgery area which might necessitate further surgery, epilepsy, numbness or pins and needles, loss of vision, meningitis, coma and death.

Ultimately the decision was mine, but I had to weigh the options.  During my first registrar's appointment I had been told that I fit the bill nicely for surgery - right sex, age, location and type of aneurysm.  I could do nothing and never have a problem. But then again, it could rupture and I could lose vision and speech or possibly die.  They would recommend surgery.

I signed the consent form and went on the waiting list for surgery.
Posted by Unknown at 10:51