What we anticipate seldom occurs; what we least expect generally happens. ~ Benjamin Disraeli

When you first start on a journey of discovery into aneurysms, you really have no idea of what to expect.  You may have some knowledge of aneurysms - especially if you have known someone with one (or two, or three), but considering the percentage that do rupture even before one is detected (see previous post), it's probable that the person sitting next to you with one of these little MFs in their head (or elsewhere) knows as much - or as little - about them as you do.  In fact, they quite probably don't even know they have one, and won't until that headache or CT scan or general dis-ease changes their life.

The next step in my journey was a cerebral angiogram.  Having previously received very little information from anyone, I now got quite some fairly good, if basic, information from PA Hospital regarding this upcoming procedure.  The Diagnostic Radiology department sent me a patient information guide which told me this was a "minimally invasive procedure" which is a day procedure only (i.e. no overnight required), required more stuff poked into my veins and arteries, and after which I would need to lie flat for a couple of hours, would not be permitted to drive home and should have someone stay with me overnight.

Because I am an inquisitive (read: nosey) person, I went back to Dr Google to get more information - and, of course, to be able to share it with all you lovely readers.

That search led me initially to Dr Wiki, where I was informed that a catheter is inserted into a main artery (in my case it would be into the femoral artery in my groin) and "threaded through the circulatory system to the carotid artery, where a contrast agent is injected. A series of radiographs are taken as the contrast agent spreads through the brain's arterial system, then a second series as it reaches the venous system."

The American National Health Institutes website gave a much more detailed description, including some matters - anaesthetic, cleaning - which would become very relevant to me during the procedure.

On 23 August I duly rocked up to the hospital, knowing a bit more about the procedure but not really sure what to expect for me personally.  First step was a blood test.  At 7am there were a surprising number of people already waiting, and many of those, it seems, were cancer patients who were regulars there.

I very quickly found out that the clinic takes people strictly in the order of arrival, and "arrival" is determined not by when you actually get there, but by when the receptionist gets your appointment letter to check off.  If the gate of the clinic is down, as it was, you hang your appointment letter on the gate and she will retrieve it and mark you off.  Three or four people who arrived, physically, after me were seen before me because they knew the system while I sat there with my appointment letter in my hot little hand until I twigged.  Not fair PA!

Onwards to the Diagnostic Radiology department ("Follow the yellow brick road"... okay, not quite, but there are painted lines on the floor) where I was only the second person in the waiting room.  I only had a short wait before a nurse came to insert a canula into my hand.  I was directed to the changing rooms and given one of those beautiful hospital gowns which reveals so much, and a basket for my clothes, and taken to another waiting area.

Again, the wait there was short, and I was laid on a gurney and wheeled into the procedure room, where I was transferred to the flatbed of the imaging equipment.  It was cold - very cold - which, given the amount of massively expensive-looking equipment in there, was probably essential. 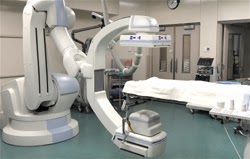 The assistants began sticking patches all over me to which leads were attached so I could be monitored on the ECG throughout the procedure.  My lower abdomen and groin area was swabbed with disinfectant - also very cold - and I began visibly shivering.  The wonderful lab assistants laid a heated blanket over me and I can't remember a time when I was so grateful for immediate warmth!

The anaethetist talked me through what he would be doing in order to numb the area where the catheter would be inserted.  He injected me and we waited, but I still had feeling so he repeated the process.  And I still had feeling.  So a secondary anaesthetic was given intravenously via the canula in my hand.

When the cut was first made for the catheter I didn't feel the incision, but what I did feel was a spurt - not just a dribble, but a spurt - of blood down between my legs.  I'm talking "fountain" spurt.  That is one heck of a freaky feeling, and you know that they are playing with a main artery and if they mess up, even just a little, you could bleed out!  They were too good for that, of course - hence I am still here to report!

I didn't feel the catheter being inserted, but the staff talked me through the entire procedure as the x-rays followed it up my body.  Dye was inserted via the canula in my hand, and the huge machine around me took pictures from every angle.

Once the imaging was done the catheter was removed, and a nurse applied pressure to the incision site for what seemed like ages to stop the bleeding.  When they were happy that all was okay, I was wheeled out of the procedure room and into recovery, where I would now need to lie still and flat for 2 hours, and then wait potentially another 4 hours before I could go home.

My recovery time was a lot less than that though.  Apparently they were using a new form of "sealant" on the wound which literally halved the recovery time.  After an hour the nurses were very pleased with the recovery progress so I was allowed to sit up enough that I could have a coffee (even instant coffee is to die for when you have fasted prior to a procedure!) and a sandwich a la breakfast.

Three hours after the procedure the staff rang my ride home and told him to come get me.

I was supposed to have someone stay with me overnight, but since the only option at that stage was my ex, we discussed it and I felt fine so I told him I didn't need him to stay.   I had an uneventful night and slept like a baby!

Now to wait for the results.

Email ThisBlogThis!Share to TwitterShare to FacebookShare to Pinterest
Labels: Angiogram