Do not regret growing old; many are denied the privilege. ~ Ogden Nash


Diagnosis. Good thing or bad thing? How many people ever actually know they are living with a potentially loaded gun somewhere in their body? When you are told, what are you supposed to feel and how does it change your life? Because no matter how upbeat you are about what your future may be, it does change.

Regardless of the reason for the rupture of an aneurysm, for many people – those who survive (see October 2013 post “Anatomy is Destiny”) – life may never be the same again. Author David Grant, a TBI survivor, notes that “Brain injury is … the last thing you ever think about until it’s the only thing you think about.”

So when you already know that the potential is there, life may have changed already.  For those diagnosed pre-rupture, the diagnosis is the life changer and thoughts of your aneurysm accompany everything you do. Many of the stories recounted on the Brainline website are from people whose TBI was the result of an accident or illness, or who may have had an aneurysm or tumour and not known about it until too late. But you don’t need to actually have a traumatic event happen to make changes, you just need to know that the potential is there and is very real.

When you do know about it in time, what do you do?  Is there anything you can do? Personally, I decided to live better.  I have set some goals into 2014: 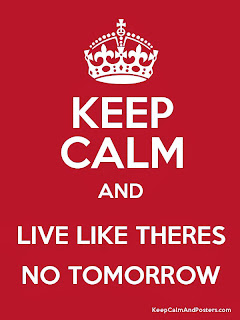 I will also continue the campaigns I am already involved in:

There are virtually no restrictions on my life – except that I should, of course, avoid undue stress (but shouldn’t we all if we can?). The neurosurgery registrar pointed out that they can’t restrict anything when too little is known about why and when an aneurysm might rupture to warrant restrictions. Perhaps that is why, for me, knowing about it is an advantage. I can plan to do things that I might otherwise have put off or not considered.  I can plan to make the very best of my time, regardless of any “what if”. And I can plan for the worst, even if the worst never happens.

Someone who doesn’t know about their aneurysm can’t do that.

I don’t regret getting old. I just regret that I didn’t have the incentive to live a better life long before now.  How strange that it took the diagnosis of a cerebral aneurysm to enable that.
Posted by Unknown at 17:43